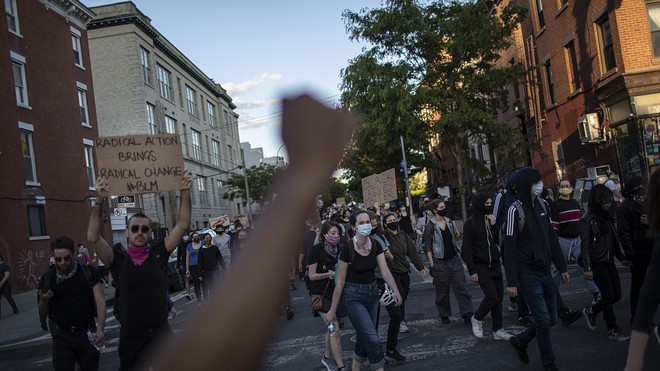 Protests & Riots – What Are They Doing to the Markets?

U.S. stock-index futures bounced around in thin trading early Monday morning, amid violent protests that reverberated throughout the country.

The clashes between police and protesters come while the U.S., and much of the world, is in the throes of the coronavirus pandemic that has rocked the domestic economy to its core.

Angry clashes between civilians and law enforcement, including fires near the White House, aren’t expected to have long-term economic implications, but the protests come as many retailers and businesses are still swooning from the pandemic and were caught up in the looting and vandalism that ensued during the weekend demonstrations.

“The direct economic impact of the protests is small, at least so far,” Mark Zandi, chief economist of Moody’s Analytics, told MarketWatch. However, he said that the near-term damage to the psyche of consumers and the business community may be more substantial.

“Just when people were starting to come out of the proverbial bunkers, the protests may be too much for them, and they will go back in,” he said. “The protests are also symptomatic of just how deep the economic problems and racial tensions go in our country,” the economist said.

Experts worry that the throngs of people gathering may also result in a jump in cases of COVID-19, just as public health officials hoped they were getting a handle on the outbreak.

“It’s a triple whammy of protests, plus raging pandemic, plus economic instability. Those three things together make for a perfect storm of viral transmission,” Peter Chin-Hong, an infectious disease specialist at the University of California, San Francisco, told the Wall Street Journal.

However, the market may take heart in the fact that states are still continuing to unlock their economies from measures implemented to stem the spread of the deadly disease. All 50 states are under some stage of reopening from the forced pandemic shutdowns.

Meanwhile, President Donald Trump’s actions against China were viewed as less confrontational than had been expected. The President on Friday announced a number of measures to censure China’s crackdown on Hong Kong’s independence, including plans to withdraw funding from the World Health Organization, but he fell short of withdrawing from a phase-one trade agreement or issuing sanctions directly against China.

Looking ahead, investors will be watching for domestic economic data, including Markit manufacturing PMIs for May due at 9:45 a.m. Eastern, and the more closely followed manufacturing index at 10 a.m. from the Institute of Supply Management. A reading of construction spending for April also is due at the same time.

For billionaire Alan Howard, the coronavirus crisis has made a huge difference.

In a good way.

According to Bloomberg News, the co-founder of Brevan Howard has delivered a massive 100% return (so far) this year for investors in the hedge fund he personally manages — that’s better than all other major macro hedge funds and one of the best stretches of his career.

Alan Howard’s fund, with the backing of a handful of external investors, was launched in 2017 with the aim of taking big risks and achieving big returns.

Since the details of the fund’s strategy aren’t divulged, it’s not clear what drove the triple-digit jump, but one source told the Financial News that the strong showing for Brevan Howard’s main hedge fund, which rallied 18% in March, stems from bets on fixed-income, currencies and rates trading.

For some perspective on what an accomplishment that return is, consider that three out of every four hedge funds in the U.S. lost money in March, as Bloomberg data showed. And that includes the likes of high-profile Wall Street names such as Bridgwater’s Ray Dalio.

The strong run has contributed to a big turnaround for Brevan Howard, which saw its firm-wide assets drop below $8 billion last year, down from $40 billion in 2013. But now, the money is starting to flow back in, with the last tally reaching $9.6 billion.

As states gradually reopen, the U.S. economy is finally showing signs of life after one of the most significant downturns in history.

Though many restrictions remain in place across the country, Americans are gaining a greater sense of normalcy as they venture out to restaurants, increase travel and buy new homes.

These areas track five key indicators that signal a growing revival of the economy as consumers resume familiar routines and move forward from lockdown measures and business closures.

1. Apple Maps is often a go-to navigation app for many travelers. However, with stay-at-home orders implemented throughout the majority of the U.S. in March and April, many Americans could only venture out for essential reasons, such as a trip to the grocery store. Data from Apple shows a sharp decline in requests for directions on Apple Maps during the early stages of pandemic as lockdown measures were put in place.

2. The restaurant industry was hit hard by the coronavirus as most states restricted their business to takeout, delivery and curbside pickup. Data from the OpenTable network shows that restaurant bookings plummeted as these regulations were put in place, and were down 100% in the last weeks of March and most of April when compared to last year.

3.  The pandemic dealt a serious blow to the hotel industry and the broader travel sector, as restrictions were put in place both within the U.S. and abroad. During the initial stages of the outbreak, global hospitality research company STR reported that the occupancy rate for U.S. hotels was at just over 20% in April, a steep drop from their more than 60% occupancy in February. The pandemic also prompted major hotel chains and resorts to temporarily close properties as travelers put their plans on hold.

4.  With airlines clamoring for government bailouts to stay afloat, the air travel industry has been one of the most visible parts of the economy impacted by the coronavirus. The daily number of travelers passing through Transportation Security Administration checkpoints fell almost 100% year-over-year in March and April and has picked up only slightly in May, according to data from TSA screenings.

5.  As coronavirus-related restrictions ease, potential homebuyers have been able to tour open houses and resume their search for a new home. Though the single-family home mortgage purchase index saw a more than 30% drop in April when compared to last year, it has since reversed its course, according to data from the Mortgage Bankers Association. The index is now up almost 10% compared to the same period last year, indicating that the home purchase market could be on its way to a quick recovery.